Economic recovery around the world could come faster if any Covid-19 vaccine is made available to all as a public good, World Health Organization Director General Tedros Adhanom Ghebreyesus has said.

He was speaking in an online panel discussion with members of the Aspen Security Forum in the United States moderated by the NBC network.

“Sharing vaccines or sharing other tools actually helps the world to recover together. The economic recovery can be faster and the damage from Covid-19 could be less,” Mr Tedros said.

“Vaccine nationalism is not good, it will not help us,” he said in an allusion to the competitive scramble of nations and pharmaceutical researchers to come up with an effective vaccine and order as many doses as possible in advance.

Mr Tedros had said on Monday that while the coronavirus was the biggest health emergency since the early 20th century, the international race for a vaccine was also “unprecedented”.

“We must seize this moment to come together in national unity and global solidarity to control Covid-19,” he told the forum.

“No country will be safe until we are all safe.”

WHO emergencies director Michael Ryan, asked about a proposed Russian vaccine, told the panel that trial data was needed to ensure any vaccines are safe and effective.

Mr Ryan also said authorities should be able to demonstrate the efficacy of a coronavirus vaccine via traditional clinical trials rather than “human challenge” studies.

He was referring to the intentional exposure of vaccinated volunteers to a virus to see whether the vaccine works.

US President Donald Trump said today it was possible the United States would have a coronavirus vaccine before the 3 November election – a more optimistic forecast than timing put forth by his own White House health experts.

Mr Trump has accused the WHO of becoming a puppet for China -where the coronavirus outbreak first surfaced late last year -during the Covid-19 pandemic and given notice that the United States will quit the agency in a year’s time.

The United States is the biggest overall donor to the WHO and had contributed more than $800 million by the end of 2019 for the 2018-19 biennial funding period.

But Mr Tedros, who has denied that the WHO answers to China or any other country, told the panel that the main damage from the Trump administration’s move to exit the Geneva-based agency would not be the loss of funding.

Mr Trump, who is seeking re-election to a second term amid a US economy crippled by coronavirus shutdowns, has pushed for schools to reopen and things to get “back to normal” as Covid-19 deaths in the country average more than 1,000 per day.

Top government health officials have said corners would not be cut in the race to secure a vaccine against the virus.

Dr Anthony Fauci, the top US government infectious diseases official, offered a more conservative view in a Reuters interview yesterday, saying there might be an indication that at least one vaccine works and is safe by year end.

Mr Trump was upbeat on the US economic recovery once a vaccine is available.

It comes as White House health experts are warning of an uptick in the percentage of people testing positive for Covid-19 in US cities including Boston, Chicago and Washington, urging local leaders to maintain health safety measures to avoid a surge.

“This is a predictor of trouble ahead,” Dr Fauci said.

Dr Fauci was asked on CNN about comments made by his White House coronavirus task force colleague, Dr Deborah Birx, identifying new areas of concern in major cities, even as authorities see encouraging signs across the South.

A recording of the call was obtained by the journalism nonprofit Center for Public Integrity.

White House data shows small increases in the percentage of positive Covid-19 tests in Chicago, Boston and Detroit and those places need to “get on top of it”, Dr Birx said. 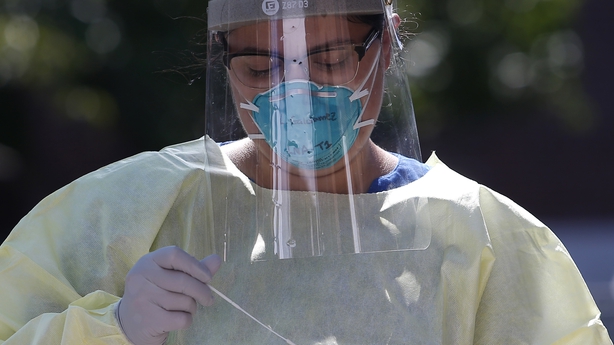 Even in cities and states where most people are doing things right, Dr Fauci said, a segment of people not wearing masks or following social distancing remains vulnerable to infection and can keep the virus transmitting in US communities.

“Unless everybody pulls together, and gets the level way down over baseline, we’re going to continue to see these kind of increases that Dr Birx was talking about in several of those cities,” Dr Fauci said.

White House coronavirus experts have in recent days sent regular warnings to cities and states not to relax measures too much before the virus is under sufficient control.

On average, 1,000 people are dying each day nationwide from Covid-19.

President Donald Trump, in contrast, has played down the staying power of the virus, saying yesterday that “it will go away like things go away” as he urged schools to reopen on time for face-to-face lessons.

Mr Trump also said children are “almost immune” from Covid-19, prompting Facebook to take down a post by him containing a Fox News video clip in which he made the statement.

Facebook said it violated its rules against sharing misinformation about the virus.

Chicago’s mayor said that school would be online-only in September, after the teachers’ union and many parents in the city objected to a plan to allow students the option of attending class twice a week in pods of 15.

Chicago is the third-largest school district in the United States behind New York and Los Angeles, with 350,000 students.

Los Angeles has already announced that students will be kept home, while New York Mayor Bill de Blasio has said he expects to have children attend classes part of the time.

Man in his 20s has died from septicemic plague in the US, health authorities confirm