A survey by Redgate highlights expectations and reservations the healthcare sector has about diving into DevOps methodology.

Narrowing the focus of its 2020 Database DevOps Report, Redgate Software recently issued a special breakdown showcasing concerns and hopes for DevOps from the healthcare sector.

While the responses indicated heightened interest in adopting DevOps for healthcare, fundamental questions about its implementation also remained. According to the report, 70% of the respondents from healthcare indicated they adopted DevOps in some, if not all their projects, or at least put a proof of concept in place. That compares with 68% of respondents from all industries in the overall Database DevOps Report from Redgate, a provider of DevOps solutions.

The healthcare sector seemed ahead of the curve in accelerating adoption with 41% of respondents in that sector indicating their organization had advanced from a proof of concept for DevOps. Other industries collectively averaged about 36% making such moves.

Freeing up developer time ranked in the report as the top motivation among healthcare respondents for the automation of delivery of database changes as part of a DevOps strategy. Increased speed of delivery was a solidly second place motivation. 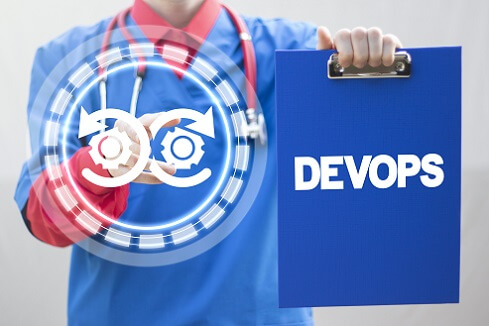 The attention DevOps gets in healthcare does not come without some reservations though. Disruption to existing workflows was the top obstacle to implementing DevOps for 24% of respondents. Lack of skills within the team, absence of alignment between development and operations, and a lack of awareness of potential business benefits were other top impediments to putting DevOps to work within respondent organizations.

Such worries may be seen across other industries, however, heavily regulated sectors such as healthcare face additional considerations, says Kendra Little, DevOps advocate at Redgate. “You have this concern of, ‘If we stop moving, how are we going to start moving again?’” The pandemic has also put pressure on IT staff across healthcare, she says.

There is a reasonable dread of failed deployments and downtime, Little says, in regards to siloed database development and also when considering changing gears. “There is a concern of, ‘If we don’t do it right, aren’t we just making it faster to throw bad code at production?’ It is a very valid and real fear,” she says.

Making changes to a functioning workflow, particularly databases, can be especially hard, Little says, more so than with application development. If trust is lost in the quality of changes made within the pipeline, the damage could be significant, she says. Mistakes could lead to slowdowns rather than increasing efficiency and time management. “Disruption is scarier when it comes to database changes than to application type changes,” Little says.

There can be significant toil and manual steps to make changes to a database in a regulated environment, she says, especially if automation is not part of the equation. This can include scripting things out, saving them in a location, filling out tickets, applying it to an environment, sending emails, and waiting for responses, she says. That process may need to be repeated across multiple environments. “It’s like filling a bucket of water, pouring it into an empty bucket, constantly doing that to move the water over manually,” Little says. “If you can use automation, version control, and modern software development to remove the manual steps, you still control the process. You can spend more time thinking about the changes.” That may lead to fewer, smarter changes that might not be made as frequently, she says.

Organizations might be reluctant to alter processes that have been developed over many years, Little says, because of the substantial impact problems and errors could have. The skills gap and paucity of trained talent can further compound the challenge of adopting a DevOps approach while trying to keep the workflow intact.

“It’s difficult hiring people who can cover all the skills you need in IT in general,” she says. There may be a need for IT professionals versed in legacy code to cover existing applications as well as know cloud architecture that the organization wants to migrate to, which can be a hard ask. “As technology accelerates, the skills gap is real,” Little says.

Enterprises might try do address gaps in their awareness and explore new options by conducting a proof of concept or an internal case study, she says, to try to spread knowledge among their teams. This could include the formation of a central DevOps team that will become familiar with toolkits, workflows, and processes to then help other teams in the organization to adopt and implement such resources. “You can’t just hire people who have these skills,” Little says. “Everyone’s worried about the lack of skills and these are the methods by which they tackle it.”

Easing the burden on developers so they are not laboring over processes is a prominent goal of DevOps adoption in healthcare, she says. The time could be invested in further developing higher level architecture and working down technical debt. “For enterprises in healthcare that have been around awhile, these systems tend to have been developed on older design principles where it’s not so easy to adapt the systems to work with new cloud technologies,” Little says.

Next Phase of DevOps: Upskilling for Processes and Humanity

How Startups Fit into Healthcare’s Transformation

Joao-Pierre S. Ruth has spent his career immersed in business and technology journalism first covering local industries in New Jersey, later as the New York editor for Xconomy delving into the city’s tech startup community, and then as a freelancer for such outlets as … View Full Bio

We welcome your comments on this topic on our social media channels, or [contact us directly] with questions about the site.

Police violence is a public health crisis, so why aren’t there health-based solutions?