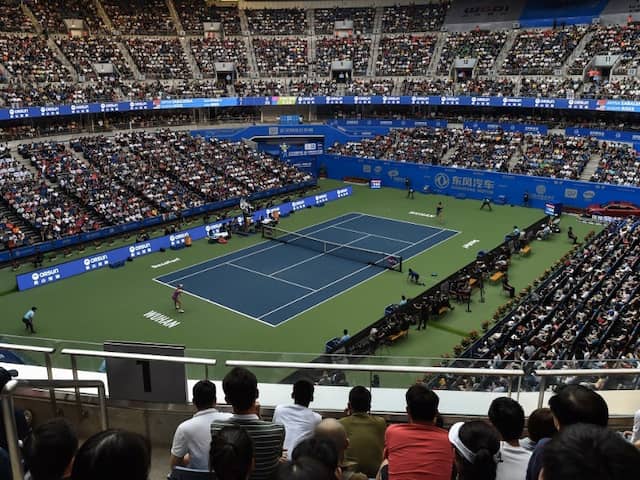 All international tennis tournaments in China this year were cancelled because of the coronavirus.© AFP

All international tennis tournaments in China this year, including the Shanghai Masters and WTA Finals, were cancelled on Friday because of the coronavirus, the ATP and WTA said. The major blow to attempts to restart tennis comes after China said it would not stage most international sports events for the rest of 2020 to keep the pandemic in check. “We are extremely disappointed that our world-class events in China will not take place this year,” Steve Simon, head of the Women’s Tennis Association, said in a statement.

“We do however respect the decision that has been made (by Chinese authorities) and are eager to return to China as soon as possible next season.”

Among the seven WTA events cancelled is the Wuhan Open in October, which promised to be hugely symbolic as the city was at the centre of the coronavirus outbreak when it emerged late last year.

The ATP said it too was cancelling its tournaments in China for the rest of the year, including the prestigious Shanghai Masters and China Open — a men’s and women’s event — in Beijing.

“Our approach throughout this pandemic has been to always follow local guidance when staging events. We respect the Chinese government’s decision to do what’s best for the country in response to the unprecedented global situation,” said Andrea Gaudenzi, ATP chairman.

“It’s with a heavy heart that we announce ATP tournaments will not be played in China this year.”

The tennis season has been at a standstill since mid-March due to the virus outbreak worldwide and is struggling to restart.

The ATP said earlier this week that a tournament in Washington DC that marked the start of the men’s tennis season next month has been cancelled.

US Open organisers insisted that would “in no way impact” the behind-closed-doors Grand Slam scheduled for the end of August.

The Cincinnati Open and US Open are still scheduled to take place back-to-back in New York from August 20, despite several leading figures in men’s tennis casting doubts over the hardcourt Grand Slam.

World number one Novak Djokovic earlier this month said he was undecided over whether to travel to compete in the US Open.

The women’s WTA tour is scheduled to restart on August 3 in Palermo, Italy, making it the first event on the recently announced new calendar.

The China cancellations — which are a setback to tennis’s hopes of building its popularity in the world’s most populous nation — come as domestic sport is slowly returning to the country.

“We share in the disappointment of many around the world who were looking forward to this (China) swing and appreciate all of the continued support from our fans, partners and the entire region, as we continue to navigate the remainder of the 2020 season,” WTA chief Simon said.

On Thursday the Chinese Basketball Association league said it would allow spectators to watch matches from Sunday and on Saturday Chinese Super League football starts behind closed doors.

However, after China’s announcement all major international sports events are in major doubt, with the postponed Formula One Grand Prix in Shanghai also now appearing doomed.

Amid race to develop a coronavirus vaccine, growing concerns of who gets it first